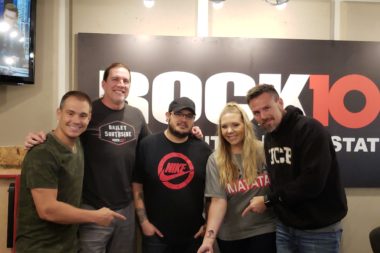 October 11th, 2018 (Atlanta, Ga) – During Game 3 of the National League Division Series between the Braves and Dodgers, Ronald Acuña, Jr. stepped to the plate with bases loaded in the bottom of the second inning in Atlanta. But before Acuña hit a grand slam to put the Braves up 5-1 in the game, Caitlin Pannell had a feeling and tweeted “If Acuña slams this I will tattoo his face on my forearm NO LIE #ForEachOther”.

The Braves responded with a gif, and Caitlin replied, “PICK YOUR PIC @ronaldacunajr24 LET’S GET TATTED”. Well, the Braves never followed up, but Rock 100.5 FM Atlanta/WNNX’s Bailey and Southside did.

Originally Caitlin tweeted out that she was accepting donation via Venmo to help pay for her tattoo. But after Bailey and Southside tracked her down, she took to Twitter to let potential funders know that she would be donating and money raised to the Braves Foundation.

Alright twitter, the @ronaldacunajr24 tattoo is happening tomorrow on @baileysouthside by @MysticOwlTattoo ! For those who wanted to contribute $ – venmo me @ cpannell223 and it will ALL go to the @Braves foundation!!!

So Thursday morning Caitlin, joined Rock 100.5 FM Atlanta/WNNX’s Bailey and Southside in-studio to make her promise permanent. Rock 100.5 reached out to the Braves organization to see if Acuña could come in studio to sign the tattoo, but they did not respond. So they teamed up with Mystic Owl Tattooing, and brought their best artist Chris Valencia in studio to put Acuña’s likeness on her arm along with his signature. They set up a makeshift tattoo parlor in the studio next door, and would periodically check in with her throughout the show to get updates from her on the tattoo’s progress. At the end of the show, she was brought back in the studio to reveal the finished product via Bailey and Southside’s Facebook Live.

Host Jason Bailey said, “You have to follow through with what you promise on social media these days. Bailey and Southside: We hold the accountable, accountable.” As of 6pm on Thursday, Caitlin’s tweet of her tattoo had 1,500 likes, 332 retweets and 103 comments on Twitter.

I tweeted, it happened, I did it. NO LIE. Thank you so much @baileysouthside and @MysticOwlTattoo!!! @Braves @ronaldacunajr24 @BleacherReport @Cut4 @MLBNetwork pic.twitter.com/d5qtB8viW9

You can listen to the entire podcast here: