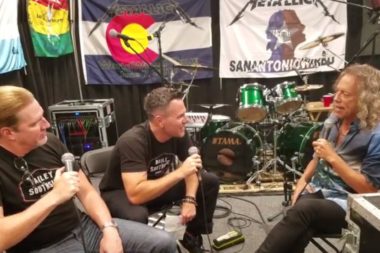 During this 15 minute interview Hammett tells Rock 100.5 FM Atlanta hosts Bailey and Southside what the biggest change in Metallica has been over the years, where he thinks the band fits in on the “tree of rock”, his thoughts on Journey, and why hasn’t Metallica played a Super Bowl halftime show.

Host Jason Bailey begins by asking, “Over 35 years, there’s been a lot of changes in the band, in your opinion, what’s the biggest change?” Kirk humorously replies, “Our hair color. I’m on my 2nd hair color.” But then continues to say, “I am enjoying myself more than ever these days, and a lot of it has to do with that I still just really love to play my guitar, and I still just enjoy it as much as I ever have.”

Co-host Southside Steve questions Kirk by asking, “Who is ‘rock’? Is Metallica the trunk of the tree or is it a branch of?” He quickly replies, “We are definitely our own branch. I definitely would say where we exist musically, we are the only ones that are….‘us’.”

Kirk at one point in the interview says, “I have to say one thing, I was a huge huge Journey fan, until they got the chick in the band.” Bailey questions Southside Steve, “The lead singer is a dude right?” Kirk exclaims, “OH THAT’S A GUY?!” Of course joking about Steve Perry. Mr. Hammett continues to say that his favorite Journey album is “Next”.

“Probably the biggest question in this conversation Kirk, is when will Metallica play a freaking Super Bowl halftime?”, Jason Bailey asks. Without hesitation he responds, “Talk to the f****** NFL man! To me it’s a no-brainer. But there’s someone up there in their ivory tower saying nope, no Metallica.”